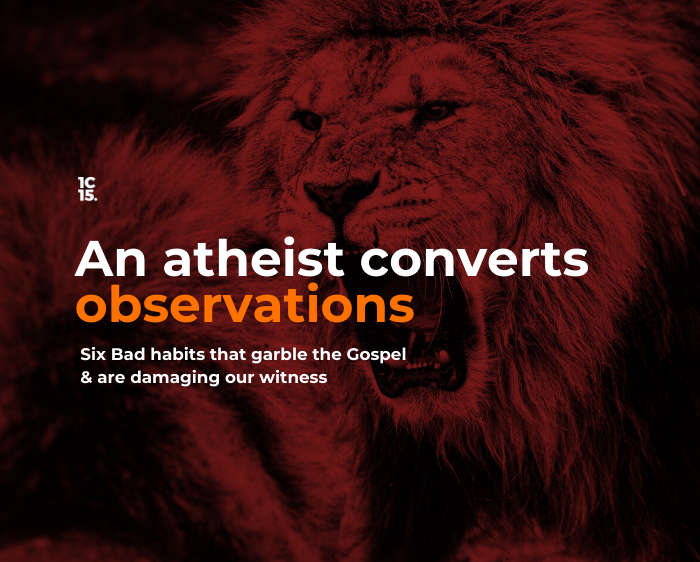 Happy Bank Holiday! I was inspired the other day to write this article When I was an atheist what were some of the irritations I had engaging with Christians? And now that I am a Christian, what have I seen that has turned my God-seeker friends away? Just an FYI I have been guilty of many of the below points at times and aim not to repeat them. So here are six pieces of advice I’d give myself and to anyone else serious in engaging with people who aren’t Christians (don’t call them gentiles!)

This comes in two different forms. We have The Christian apologists (who generally are more prepared with answers to sceptics) like myself who have the ability to perhaps  rush in our right mind, objections to the faith, but all too often this response is not done in gentleness and respect. Too often I’ve seen not just a response to an answer, but the belittling of the person raising the objection. If it’s a youtube sceptic for example and you respond to their video by calling their ideas stupid the person may feel you’re calling them stupid too. It’s quite simple to refute an idea without either embarrassing the person and stimulating future dialogue.

To my theologians (That’s like, every Christian), don’t respond with “The Bible tells me so”, explain why you believe what you believe, the logic behind it and why the foundational beliefs are best for everyone in the long run. If you don’t know how to respond, there’s nothing wrong with “I’ll get back to you on that, so I can frame my answer better, is that ok with you?”

Christians, we have a responsibility in the Youtube comments sections and forums to be of sober mind, speaking with wisdom and grace… We all know there are plenty of people in the comments section which make us ashamed—whether sceptic, religious or who knows what. Here’s 5 P’s you can live by

PONDER about your answer, is it going to help?

PROOF it out first, how’s it sound?

PRAY about it after

PREPARE for a response, and in some cases a long back and forth or severe mocking

If you can’t say it to someone’s face and be satisfied—more amongst other people, then you probably shouldn’t post it.

God Is not Labour, Conservative, Green Party, Lib Dem’s, UKIP, Brexit party and all that jazz. I don’t think any resemble Christian principles at all, some may more than others but then others advocate for our Christian features. So sure we vote, but don’t brand people as heretics because they voted for a flawed party. they kinda all are…

When I was an atheist, The Christian lingo drove me crazy or I completely misunderstood it! And Now that I am a Christian, there’s like 100 ways to say a particular word but we like to use the Christian word because it’s what we’re used to.

If you do have to use jargon explain it either before or after saying it. The words Salvation, justification, forgiveness, sanctification, redeemed, reconciled, sin, confession, repentance, holy, glory etc. Are all words that either mean nothing to people at face value or mean something completely different. I think the first time I said we’re all sinners a friend reacted to me as if I’d called them a murderer or a rapist! This is a classic example of when a word has been redefined by the culture and we either need to claim it back by explaining it or using a clearer word they’d understand to convey the Biblical teaching (They probably haven’t got time to read a Bible to get the full context that sin is to do actions against God’s desire for us).

5. Stop being a hypocrite

Seeing Christians either forgoing their Christian beliefs for “likes” or “follows”, or if they are influential, spending no time displaying any Christian presence on their social media’s really surprises me. If it is the Gospel that saves, like a vaccine for eternal life, how can you not want to lay down a few posts here and there for opportunity? Of course I am not saying every single post has to be Christianised! But if people can’t identify you as a christian by looking at your social media, that’s a little bit worrying. And ideally they see you as a Christian not because your posts are all “turn and burn” but more like “Oh he’s a nice chap, ah a Christian, well at least he treats me like a human being”. The great commission isn’t an afterthought.

Look, evolution is going to be a hot issue, you know that, topics of ethical weight also. If your plan to lead people to Christ is to step into every controversial issue you can think of, good luck. Sure when I was a sceptic I cared about these issues, but it was usually the religious who brought it up first, or dwelt on it so long that they never talked about Christ after many many separate conversations. Think carefully about the topics you invest on with friends.