Hundreds of examples of Fulfilled Prophecy 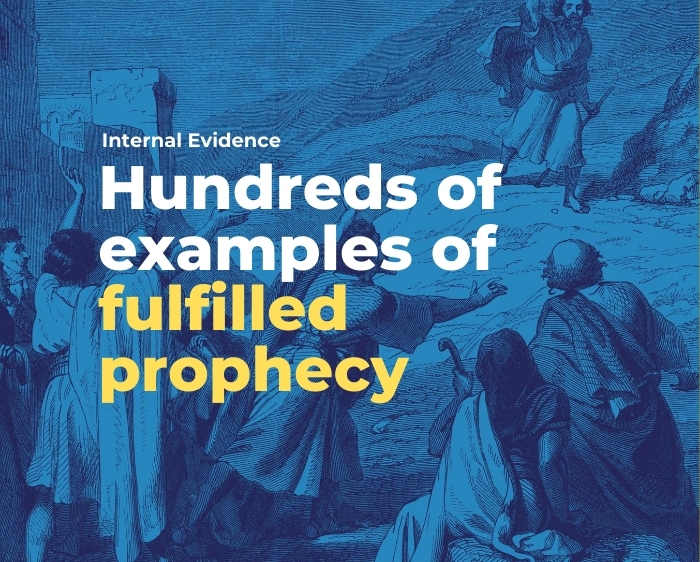 Fulfilled prophecy is a crucial internal piece of evidence as it informs us of predictions made long before their time. We have found ancient manuscripts, a famous Isaiah 53 scroll was found that predates the first century AD with this prophecy. There are a few factors prophecy can speak into:

So does Jesus fit the prophecy given in Isaiah 53, as the so-called “suffering servant”? See this breakdown of Isaiah’s prophecy about whom Christians believe strongly describes Jesus. The structure is heavily lifted from beliefmap.org who’ve provided an in-depth viewpoint of opinions on this passage. This is just a handy shortened breakdown. If you want just the list of prophecies and fulfillment, scroll to the end.

This is relevant because Jesus too was seen merely as a poor sage, with a trivial pedigree, and coming from an unimportant town. He lacked the glory and trappings of royalty.

Is not this the carpenter’s son? Is not His mother called Mary, and His brothers, James and Joseph and Simon and Judas? And His sisters, are they not all with us? Where then did this man get all these things?” And they took offense at Him. But Jesus said to them, “A prophet is not without honor except in his hometown and in his own household.”

During his ministry, Jesus and his disciples depended entirely on the donations of others.

Matthew 10:9-11- Do not acquire gold, or silver, or copper for your money belts, or a bag for your journey, or even two coats, or sandals, or a staff; for the worker is worthy of his support. And whatever city or village you enter, inquire who is worthy in it, and stay at his house until you leave that city.

Luke 9:58 – And Jesus said to him, “Foxes have holes, and birds of the air have nests, but the Son of Man has nowhere to lay his head.”

This is relevant because Jesus too was widely hated and rejected by the Jews.

John 8:48 – The Jews answered and said to Him, “Do we not say rightly that You are a Samaritan and have a demon?”

Luke 4:16-30 – And He came to Nazareth,… And He said, “Truly I say to you, no prophet is welcome in his hometown … they got up and drove Him out of the city, and led Him … in order to throw Him down the cliff.

Luke 23:18-25 – But they cried out all together, saying, “Away with this man [Jesus], and release for us Barabbas!” (He was one who had been thrown into prison for … murder.) … they were insistent, with loud voices asking that He be crucified. … he released the man they were asking for who had been thrown into prison for insurrection and murder, but he delivered Jesus to their will.

Isaiah 53:4 says “Surely our griefs He Himself bore, And our sorrows He carried; Yet we ourselves esteemed Him stricken, Smitten of God, and afflicted.”

Deuteronomy 21:23 – his corpse shall not hang all night on the tree… For he who is hanged is accursed of God

52:5 Pierced for our transgressions

Isaiah 53:5 says “But He was pierced through [wounded] for our transgressions, He was crushed for our iniquities; The chastening for our well-being fell upon Him.”

This is relevant because Jesus was similarly wounded for our transgressions.

Acts 2:23 – this Man, delivered over by the predetermined plan and foreknowledge of God, you nailed to a cross

Colossians 2:14 – He has taken [our debt of sin] out of the way, having nailed it to the cross.

52:5 Scourging we are healed

Isaiah 53:5 says “But He was pierced through for our transgressions,… for our iniquities … by His scourging we are healed.”

This is relevant for two reasons.

On historical scourging of Jesus:

Mark 15:15 – Wishing to satisfy the crowd, Pilate released Barabbas for them, and after having Jesus scourged, he handed Him over to be crucified.

John 19:1 – Pilate then took Jesus and scourged Him.

Isaiah 53:6 says “All of us like sheep have gone astray, Each of us has turned to his own way; But the Lord has caused the iniquity of us all To fall on Him.”

This is relevant because Jesus, in concept, died in a way that provided substitutionary atonement for the wicked.

This is relevant because it describes Jesus perfectly, in his affliction, his acceptance of being slaughtered.

1 Peter 2:23 – When they hurled their insults at him, he did not retaliate; when he suffered, he made no threats. Instead, he entrusted himself to Him who judges justly.

Isaiah 53:8 says “He was cut off out of the land of the living For the transgression of my people, to whom the stroke was due?”

This is relevant because Jesus was executed by crucifixion, and this was regarded as involving God’s judgment, being a substitutionary atonement for transgressions of sinners everywhere.

Isaiah 53:8 says “He was cut off out of the land of the living For the transgression of my people, to whom the stroke was due?”

This is relevant because Jesus too was seen as a substitutionary sacrifice for the transgressions of the guilty.

Scriptures which clarify on the substitutionary nature of Jesus’s deed include:

1 Peter 2:22 – and He Himself bore our sins in His body on the cross, so that we might die to sin and live to righteousness; for by His wounds you were healed.

1 Peter 3:18 – For Christ also died for sins once for all, the just for the unjust, so that He might bring us to God, having been put to death in the flesh, but made alive in the spirit

2 Corinthians 5:21 – He made Him who knew no sin to be sin on our behalf, so that we might become the righteousness of God in Him.

Galatians 3:10 – For as many as are of the works of the Law are under a curse; for it is written, “Cursed is everyone who does not abide by all things written in the book of the law, to perform them.”

Isaiah 53:10 says “He would render Himself as a guilt offering.” This is relevant because Jesus’s death was precisely understood this way.

Isaiah 53:10 says the Servant is sinless.

This is relevant because Jesus too was sinless (at least according to tradition).

The implication that the servant is sinless comes from multiple points:

Jesus aligns with the servant of Isaiah 40-50

Isaiah 42:4 – “He will not be disheartened or crushed Until He has established justice in the earth; And the coastlands will wait expectantly for His law.”

This is relevant because through Christ’s church (“the body of Christ”), justice, liberty, rights, equality, and fairness have flourished all over the world in a way unseen in history. The remotest “coastlands” on the Earth are experiencing the spread of this and turning to Christ.

Isaiah 49:1-7 – Listen to Me, O islands, And pay attention, you peoples from afar.The Lord called Me from the womb;From the body of My mother He named Me. He has made My mouth like a sharp sword,In the shadow of His hand He has concealed Me;And He has also made Me a select arrow,He has hidden Me in His quiver. He said to Me, “You are My Servant, Israel,In Whom I will show My glory.” But I said, “I have toiled in vain,I have spent My strength for nothing and vanity;Yet surely the justice due to Me is with the Lord,And My reward with My God.” And now says the Lord, who formed Me from the womb to be His Servant,To bring Jacob back to Him, so that Israel might be gathered to Him(For I am honored in the sight of the Lord,And My God is My strength), He says, “It is too small a thing that You should be My Servant To raise up the tribes of Jacob and to restore the preserved ones of Israel;I will also make You a light of the nations So that My salvation may reach to the end of the earth.” Thus says the Lord, the Redeemer of Israel and its Holy One,To the despised One,To the One abhorred by the nation,To the Servant of rulers,“Kings will see and arise,Princes will also bow down,Because of the Lord who is faithful, the Holy One of Israel who has chosen You.”

This is relevant for several reasons. For example, Jesus too, having been rejected at first by his fellow Jews (“abhorred by the nation”), would say “I have toiled in vain…. Yet surely the justice due to me is with the LORD” and yet also ultimately triumphs, being “a light ot the nations So that My salvation may reach to the end of the earth.”

Isaiah 50:4-8 – The Lord God has opened My ear; And I was not disobedient Nor did I turn back. I gave My back to those who strike Me, And My cheeks to those who pluck out the beard; I did not cover My face from humiliation and spitting. For the Lord helps Me, Therefore, I am not disgraced; Therefore, I have set My face like flint, And I know that I will not be ashamed. He who vindicates Me is near; [Who is among you… obeys the voice of His servant…?]

This is relevant for several reasons. For example, Jesus too righteously turned the other cheek and was harassed, spitted on, and faced humiliation. Jesus too yet was vindicated by God through Jesus’s resurrection, and the flourishing of salvation from him.

Why Does This Matter?

Fulfilled prophecies matter. If someone predicts something hundreds of years before an event takes place, the odds of that happening by a mere guess are astronomical. Let alone all the prophecies that point to Jesus in the Old Testament.

This passage in particular matters because Isaiah lived during 700-600 BC. These prophecies took place 600-700 years before Christ came to earth. If even just one of them came true, the odds would be astronomical, let alone this passage.

This passage also gives us insight into Jesus’ life and his work on the cross. We can read and appreciate just how much he has done for us.

This passage also leaves the Old Testament readers with no excuse. Jesus made it obvious that he was the suffering servant. Even if people never read the New Testament, they can see from the example Jesus gave that no one matches the Suffering Servant quite as well as he does.

For more passages that have been proposed as Messianic prophecy, see the linking verses below.