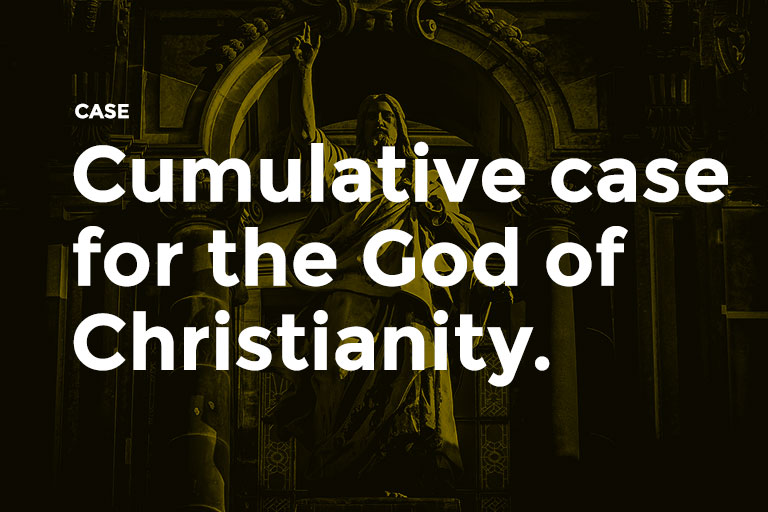 It is worth thinking of the arguments for God’s existence as a cumulative case. Even if an argument is not strong independently, or it doesn’t feel as strong to you, with others it will be stronger like a law case, the more witnesses, the more evidence, the stronger the conviction of truth can be made,

But one focus would be if an argument is strong by itself then as a cumulative case, it would be very strong to which I believe it is. Don’t think of the arguments like a link in the chain, its more like chain mail. Each chain reinforces the other to make it stronger.

This may feel more like a summary but it’s primary principle is to take you on a journey through the arguments for God’s existence and how we might build a case for Christianity.

There are three steps/premises in Leibniz’s reasoning:

4. The universe has an explanation of its existence.

5. Therefore, the explanation of the universe’s existence is God.

Given the truth and reliability of the three premises as we explain in the article, the conclusion is the only one left on the table, that God is the explanation of the existence of the universe.

As well as this, the argument posits that God is

We can summarize Ghazali’s argument in three simple steps:

1. Whatever begins to exist has a cause.

2. The universe began to exist.

3. Therefore, the universe has a cause.

Elminitating all other options leaving us with design, the cause of the universe must have certain properties:

Ghazali has given another great reason for why the First Cause must be personal: It’s the only way to explain how a timeless cause can produce a temporal effect with a beginning like the universe.

Here’s the issue: If a cause is sufficient to produce its effect, then if the cause is there, the effect must be there, too. For example, water will freeze when the temperature is below 0 degrees centigrade; the cause of the freezing is the temperature’s falling to 0 degrees. If the temperature has always been below 0 degrees, then any water around would be frozen from eternity. It would be impossible for the water to begin to freeze just a finite time ago. Now the cause of the universe is permanently there, since it is timeless. So why isn’t the universe permanently there as well? Why did the universe come into being only 13.7 billion years ago? Why isn’t it as permanent as its cause?

Ghazali maintained that the answer to this problem must be that the cause is a personal being with freedom of the will. His creating the universe is a free act that is independent of any prior conditions. So his act of creating can be something spontaneous and new. So, we’re brought not merely to a transcendent cause of the universe but to its Personal Creator.

The Kalam cosmological argument thus gives us powerful grounds for believing in the existence of a:

Fine-Tuning of the Universe

The universe is clearly fine-tuned as figures from all backgrounds, beliefs and understandings state. The question was what was the cause?

We concluded through analysis that physical necessity and more importantly chance were unsuccessful to handle the data and concluded that the universe is therefore designed.

Putting it simply and building upon the foundations of the Contingency and the Kalam, apart from a personal creator we can know that he specifically is an intelligent personal designer. This might be inferenced apart from the Fine-tuning argument, this argument merely bolsters the claim and looks to the specific complexities in our universe.

The argument for objective moral values and duties

The moral argument in one of its simplest forms would look like this:

We have successfully argued that the first two premises are true as many are reluctant to deny them. This again is complementary to the 3 prior cosmological arguments—all seeking the grounding point. This argument informs us of the moral nature of God and gives us a:

Every time we make a moral decision, this argument appears.

Life is meaningless without God

We have also explore what life without God’s existence at all would look like:

So far we’ve established strong long-standing arguments for God’s existence and that to live without a God at all would be abysmal. Good thing we have evidence. But how do we make the leap to Christianity?

So what have we established so far as background factors?

So we have a lot going into this and more specifically a type of God that doesn’t seem to fit the material gods of paganism, nor the eastern religions. No, you are left with the Abrahamic faiths.

There are many evidences for the claim God rose Jesus of Nazareth from the dead, but the minimal case evidences is presented as follows:

Many critical scholars such as Anthony Flew, one of the leading atheists in the late 20th century granted 12 facts so there’s more. But these five are enough to stand as a force against every existing opposing theory of the resurrection.

As for all the arguments above, there are common refutations that are known as responses. The arguments from natural theology will always be defended and continued to do so in different ways over the centuries depending on the new types of objections or recycled objections packaged in new ways.

There are two objections that stand out:

For the Christian case to have more weight, adequate answers to at least suffice for these areas are required. But as weighty as they may appear:

So as much as these defeaters arn’t really problematic in the wider scheme of things, they can be responded to efficiently.

With the responses in place we can be happy with the conclusions we have for the Bible’s reliability or at least enough to deem it as plausible (we’re never going to get 100% certainty unless we time travel but no ones asking realistically for such a high bar!).

Now when it comes to the problem of evil I am preparing (so this will be updated) defeaters for this objection. These are the following areas that will be addressed in 2020

Now if you have a series of arguments for God’s existence, evidence for the resurrection, plausible responses to the defeaters listed here then you have a well structured argument. With all this data, you are ready to learn and deploy Pascal’s Wager