Letter to the Corinthians (1) 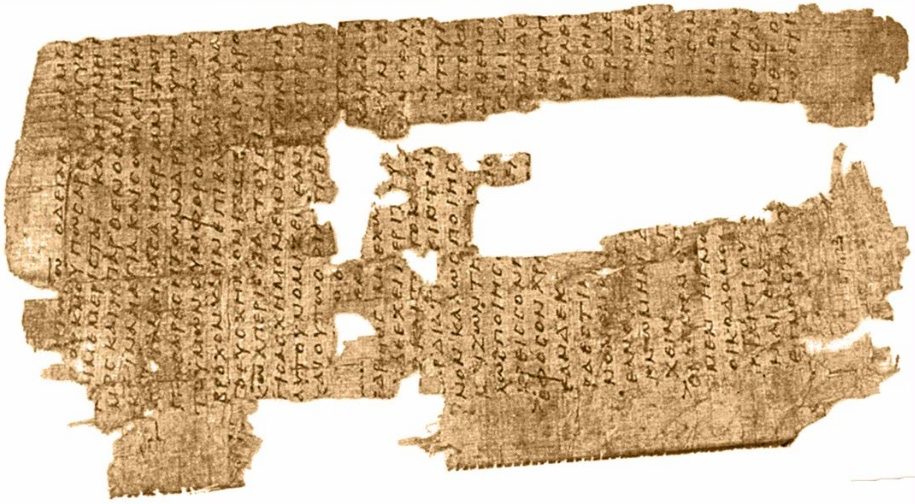 Who is the Author?

There is a consensus among historians and Christian theologians that Paul is the author of the First Epistle to the Corinthians [Robert Wall, New Interpreter’s Bible Vol. X (Abingdon Press, 2002), p. 373]. The letter is quoted or mentioned by the earliest of sources, and is included in every ancient canon including that of Marcions.

Some scholars point to the epistle’s potentially embarrassing references to the existence of sexual immorality in the church as strengthening the case for the authenticity of the letter.

Paul gives his own name as the author in 1 Corinthians 1:1. The book contains many personal details about Paul which agree with the other books of the New Testament. Because Paul established the church in Corinth, he felt a sense of personal responsibility for the members of that church (4:15). So, Paul had a good reason to write this letter.

Sosthenes, who is listed as a co-author of 1 Corinthians (1 Cor 1:1) may well be the scribe here or have some involvement in forming the letter with Paul. Could Tertius still be the scribe? (Romans 16:22) Possibly, Sosthenes being a convert may be familiar with the area and be of assistance when composing to his audience.

The above manuscript known as P46 is a page of an early collection of fragments containing the book of 1 Corinthians 1.14-23; 1.24-2.2; 2:3–3:5; 3:6–2; 9:7 (the section shown above is 1 Corinthians 1.14-23; 1.24-2.2). Dating to the late 2nd century/ start of the third, the manuscript evidence gives witness to the name of Paul, his attribution of him as the author from early on found in Egypt and is known to be a copy pushing the original further to the event. Considering how papyrus can deteriorate within a few hundred years, this is truly remarkable fortune.

This document dating to the late second century gives us Paul’s stamp of the letters he has written according to early church tradition. We see here as it refers to the letters to the Corinthians: “As for the Epistles of (40-1) Paul, they themselves make clear to those desiring to understand, which ones [they are], from what place, or for what reason they were sent. (42) First of all, to the Corinthians, prohibiting their heretical schisms”

Here church fathers make reference to Paul passing on commands or writing letters. It is an additional factor for all Paul’s epistles that he was known as someone who wrote, taught truth and passed on commands, given an authority the first disciples did not possess. See two references below to this.

Ignatius wrote to the Romans ca. 105-107 AD: “I may be found a sacrifice to God. I do not, as Peter and Paul, issue commandments unto you. They were apostles of Jesus Christ, but I am the very least [of believers]: they were free,”

Polycarp in his letter to the Philippians ca. 115 AD: “For neither I, nor any other such one, can come up to the wisdom of the blessed and glorified Paul. He, when among you, accurately and steadfastly taught the word of truth in the presence of those who were then alive. And when absent from you, he wrote you a letter,”

“Bear in mind that our Lord’s patience means salvation, just as our dear brother Paul also wrote you with the wisdom that God gave him. He writes the same way in all his letters, speaking in them of these matters. His letters contain some things that are hard to understand, which ignorant and unstable people distort, as they do the other Scriptures, to their own destruction.”

The Book of 1 Corinthians has a careful plan. In chapters 1 to 6, Paul encourages the Christians to be more mature in their relationship with God. In chapters 7 to 11, he deals with the questions in their letter to him. In chapters 12 to 15, he explains some other points that they need to know. Chapter 16 contains the greetings and personal instructions that we usually find at the end of Paul’s letters.

In 1 Corinthians 16:8, Paul says that he wrote the letter in Ephesus. We have an account of the early histories of the churches in Corinth and Ephesus in Acts chapters 18 and 19. Paul worked in Corinth for 18 months (Acts 18:11). Then Paul went to some other places before he went to Ephesus. He stayed in Ephesus for 2 years and 3 months (Acts 19:8; Acts 19:10). Students of history think that Gallio began to rule Achaia in the year 51 A.D. Acts 18:12 shows that Paul was working in Corinth during Gallio’s rule. That fact can help us to calculate a possible date for Paul’s letter.

We have an archaeological discovery of a collection of nine fragments discovered in the 20th century at the Temple of Apollo in Delphi, Greece, with a man named Gallio who tried and judged the Apostle Paul.

“And when Gallio was the deputy of Achaia, the Jews made insurrection with one accord against Paul, and brought him to the judgment seat”.

There is a consensus among historians and Christian theologians that Paul wrote 1 Corinthians in Ephesus around 51-53AD.

Jesus, nor the apostles, nor Polycarp, Clement or Irenaeus left much for us to work with in terms of a formal “ok so here’s the rules of determination”. But what they did do is inform us that they had an informative way of knowing what was truth and what was not. And the truth had to have a connection to eyewitnesses.

For we did not follow cleverly devised stories when we told you about the coming of our Lord Jesus Christ in power, but we were eyewitnesses of his majesty.

2“So now we must choose a replacement for Judas from among the men who were with us the entire time we were traveling with the Lord Jesus— from the time he was baptized by John until the day he was taken from us. Whoever is chosen will join us as a witness of Jesus’ resurrection

One of the soldiers, however, pierced his side with a spear, and immediately blood and water flowed out. (This report is from an eyewitness giving an accurate account. He speaks the truth so that you also may continue to believe.)

“God raised Jesus from the dead, and we are all witnesses of this.

You killed the author of life, but God raised him from the dead. And we are witnesses of this fact!

We are witnesses of these things and so is the Holy Spirit, who is given by God to those who obey him.”

“And we apostles are witnesses of all he did throughout Judea and in Jerusalem. They put him to death by hanging him on a cross,but God raised him to life on the third day. Then God allowed him to appear, not to the general public, but to us whom God had chosen in advance to be his witnesses. We were those who ate and drank with him after he rose from the dead. And he ordered us to preach everywhere and to testify that Jesus is the one appointed by God to be the judge of all—the living and the dead. He is the one all the prophets testified about, saying that everyone who believes in him will have their sins forgiven through his name.”

[Paul] With Christ as my witness, I speak with utter truthfulness. My conscience and the Holy Spirit confirm it.

I passed on to you what was most important and what had also been passed on to me. Christ died for our sins, just as the Scriptures said. He was buried, and he was raised from the dead on the third day, just as the Scriptures said. He was seen by Peter and then by the Twelve. After that, he was seen by more than 500 of his followers at one time, most of whom are still alive, though some have died.Then he was seen by James and later by all the apostles. Last of all, as though I had been born at the wrong time, I also saw him. For I am the least of all the apostles. In fact, I’m not even worthy to be called an apostle after the way I persecuted God’s church.

And now, a word to you who are elders in the churches. I, too, am an elder and a witness to the sufferings of Christ. And I, too, will share in his glory when he is revealed to the whole world. As a fellow elder, I appeal to you:

Caius the church father in 200AD writes how they knew of two fake letters circulating in Paul’s name.

“There are also in circulation one to the Laodiceans, and another to the Alexandrians, forged under the name of Paul, and addressed against the heresy of Marcion; and there are also several others which cannot be received into the Catholic Church, for it is not suitable for gall to be mingled with honey”.

How did they work this out? How did they know what was the divinely inspired word of God? We can thank Eusebius for beginning to help us clear up this territory. In his Ecclesiastical History, he mentions his four categories of books with descriptions as to why some were accepted, disputed, rejected and seen as heretical from his survey of the church fathers history going back and into the apostolic age. This is the structure we will take when we assess the books of the New Testament and this includes investigating the books the church rejected.

So these summarised standards are these:

We see in 2 Peter 3:15-17 accredit the works of Paul as scriptures, and Peter, being the lead apostle, can testify to apostolicity. Elsewhere in Paul’s letters, Paul has called himself inline with the apostles (Romans 1:1 for example) and several times in 1 Corinthians. In 1 Corinthians 15:3-7 we see Paul associate himself with the Apostles as those to whom the risen Jesus appeared to. So Paul is an apostle and in Galatians 2:6 the Apostles Peter and James reviewed what Paul was preaching and added nothing to his message, meaning what he was preaching was inline with them. 1 Corinthians, through it’s author, has all the signs of being apostolic

Like stated on the exchange in the beginning of Galatians 2, Paul got his messaged verified by the apostles. Paul also has a consistent message doctrinally with what Jesus teaches. There is nothing in the writings of Corinthians that is said to contradict the Gospels or the Christian message. There are times when Paul is addressing specific cultural questions and then he responds which feels more specific than the Gospels, all Paul is doing here is applying to more specific scenarios and giving depth to which we may not be inspired to uncover.

There has been no challenge by the early church fathers to 1 Corinthians, even heretics like Marcion and Valentinus tried to use the documents. When something is widespread and widely agreed upon, it is very hard for a sceptic to get around it often (that’s not to say they didn’t try, especially with Jesus’ biographical Gospels!).

This is not only relevant, but for the church in Corinth, and the modern church, Paul is addressing questions which any church could be tasked with and through God’s guidance and Christ’s law. Much of what Paul writes you can see it being written to just one church but also see how it could address the church kingdom as a whole.

Paul is called by God (Acts 9), claims in many of his letters to be sent as an Apostle for Christ Jesus (Romans 1 for example).  He has the mandate also of the Apostles (Galatians 1:17 – 2:6; 2 Peter 3:15-17) and is considered by the church Canonical, with it being in all the Christian lists of New Testament books. They could additionally as with all New Testament books recognise the ring of truth within that shows the readers of the text that it is inspired. Corinthians falls into this bracket. An Inspired Paul led by God is the claim to this letter.

Categories: A7The letter to the Corinthians (1)