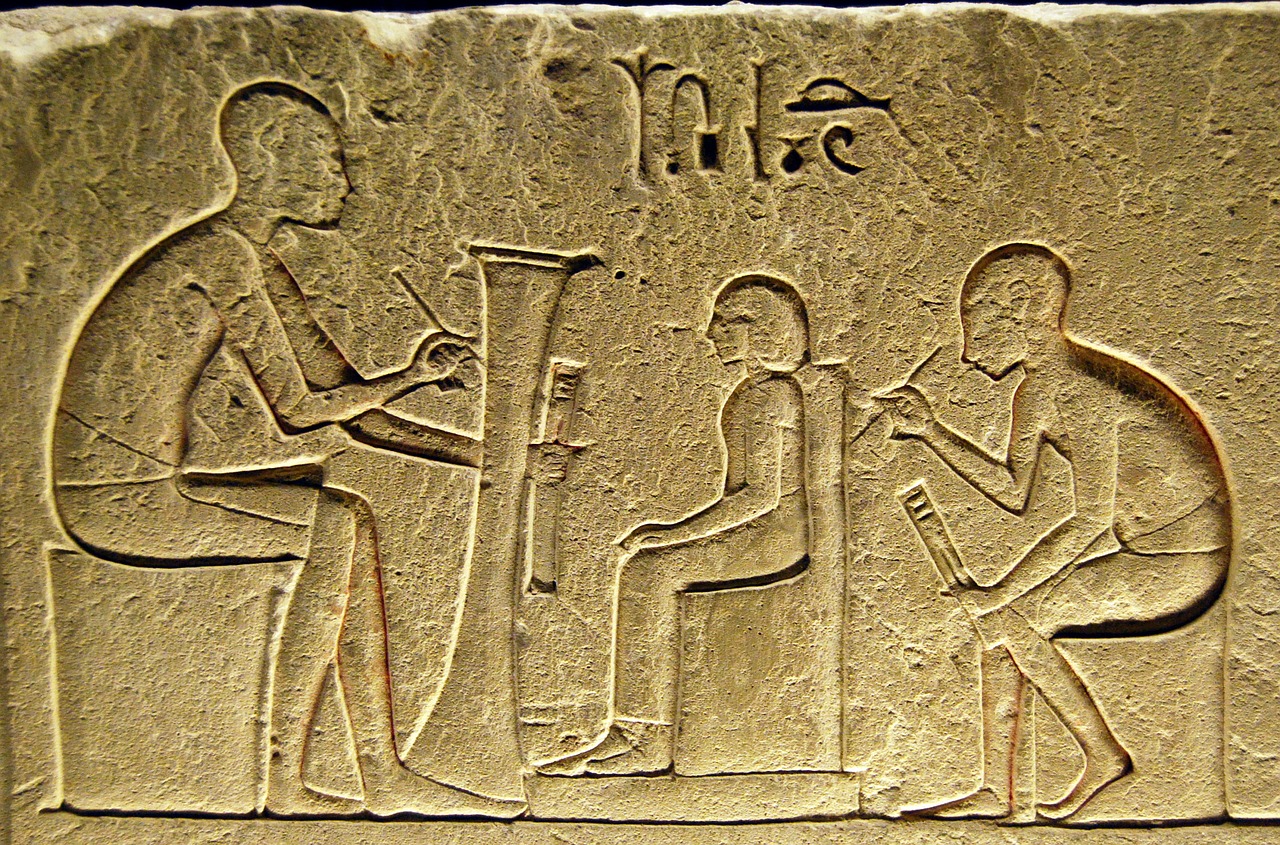 Where did the scribes come from? Jewish scribes

The ancient Jewish religious culture was already well established in the first century, and it was from this culture that the apostles and first believers emerged. It’s clear that the Jews guarded Scripture with extreme care and precision. From the post-exile time of Ezra (and even before), there were priests (Deut. 31:24–26) and scribes (called Sopherim) who were given the responsibility of copying and meticulously caring for the sacred text. The scribes continued to work in Jesus’s day and were mentioned throughout the New Testament by the eyewitnesses who observed them alongside the Pharisees and other Jewish religious leaders.

The Old Testament Scriptures were revered and protected during this period of time, largely because early believers considered them to be the holy Word of God along with the New Testament documents. Paul described Luke’s gospel as Scripture (1 Tim. 5:17–18), and Peter also described Paul’s letters as Scripture (2 Pet. 3:15–16). Paul told the local churches to treat his letters accordingly, making them available to other congregations so they could read them during their meetings (Col. 4:16 and 1 Thess. 5:27). It’s reasonable to conclude that the New Testament documents were handled in a way that was similar to the manner in which other ancient Scripture was cherished and preserved. [Wallace, J. Warner. Cold-Case Christianity: A Homicide Detective Investigates the Claims of the Gospels (pp. 230-231). David C Cook.]

What did they write on? Papyrus & later parchment

Papyrus is made by taking Papyrus reeds and layering strips placed vertically and then placing a layer on top of this a layer that’s horizontal, and then smashing this together so the natural juices of the reed combine the two sides. When you write in the ancient world you often would write with the fibre. Papyrologists are the ones who today specialise in studying the writings written on these ancient papyrus manuscripts. Later, manuscripts were written upon parchment paper and the process is expressed here by Daniel B Wallace:

“The first form it was written on was Papyrus which is kind of like ancient paper. And then the second stage was parchment, animal skills that are scraped very very thin. Parchment is the vast majority of our manuscripts, the earliest ones are typically Papyrus, the later ones are frequently and then ultimately paper”.

“The author himself may hold the pen but usually it was a professional scribe that did the writing. And then the pen would be handed to the author who added his name at the very end of this ready to publish copy.

Often but not always, a copy was made of the published document and then retained and so in a very real sense there would be two finished documents, even though only one would be perhaps signed. We should also assume that in some cases involving letters, multiple copies were made. In other words, there wasn’t just one original that was sent out as an autograph to one destination, but there might be 3,4,5. We actually have evidence for this at Qumran where we have six fragmentary letters, all the same letters found together in cave four. It’s quite possible the letter to the Ephesians was one of these kinds of letters with multiple copies sent out to different destinations”. [Craig A Evans, Fragments of Truth]

Why is this important? With one sent and one possibly retained, it increases the chances one of these would have survived and copies would have been made of that which had the effect of aiding the stabilising of the text. If there are multiple letters in different churches, you begin to develop these lines of transmission. So as these 2-6+ copies are duplicated they have the originals, the published copies for reference in six places, and as they are rewritten, we can do some textual criticism to see if there are any variances in one place but maintain a sentence correctly in all the others.

Often a secretary would write out a copy of the dictated letter onto wax tablets then they would take those tablets, produce the actual letter on Papyrus or parchment and then review it with the original author before sending out. You didn’t desire to waste papyrus! Papyrus roll wasn’t as expensive as some claim, putting together a professional Codex might well be however. There’s still the ink, the cost of the professional scribe, time. One could imagine the costs mounting up the longer you took.

Professor Ben Witherington III Sums up nicely the pressure, stress and professionalism involved in producing such a letter using Romans as an example which was written by Tertian (Romans 16:22) and dictated by Apostle Paul.

“It would take a good 3-4 hours to take dictation like Romans. On top of that you would have to produce a fair hand copy which would be the distributed copy. From the start there would be two copies: the one the scribe and the author retained, and the one that was sent to whoever the recipient of the document are. It’s a laborious process and they had to be clear because without punctuation and division of words, the capital letters had to be absolutely clear as to what they are, and somebody knew where to divide the words. So it’s an expensive process”.

Scribes have two processes active to them

It’s not like modern books where we have almost an unlimited page capacity to some extent. Daniel B Wallace informs us about the details of the scrolls, it’s limitations and why they weren’t on some giant roll of paper. Keep in mind the book form known as “the codex” didn’t come around until later centuries where you could bind papyrus sheets together.

“The longest usable scroll that was still wieldy of some sort would be no longer than 35 feet long. When taking the average sized lettering, what that means is it could only contain one gospel. The Gospel of Luke or Acts would be right around 28ft by those estimates. You couldn’t put Luke and another gospel in there. This is why Luke wrote both of these books as separate volumes. They almost certainly were written at the same time, but because of the material that was used, namely Papyrus scrolls, they couldn’t be bound together as a single book”.

Professor Craig Evans has examined roughly 100 of the earliest manuscripts many involving gospels from the second and third century and has noted that “Every one of them is very carefully written”. There were 2 methods of copying in the ancient world

Sceptical scholars like Bart Ehrman has expressed in some of his more popular works that these manuscripts were carelessly and quickly copied, but there’s just no evidence to support that that claim. There’s not a single document that’s been discovered of any fragment of any text of the New Testament in such a handwritten style. More to it, Larry Hurtado in the documentary Fragments of Truth talks about one such early manuscript which is covered in changes notes that the same scribe who write the manuscript also issues the changes — The scribe wasn’t very skilled but was careful to make sure they’d done the job right.