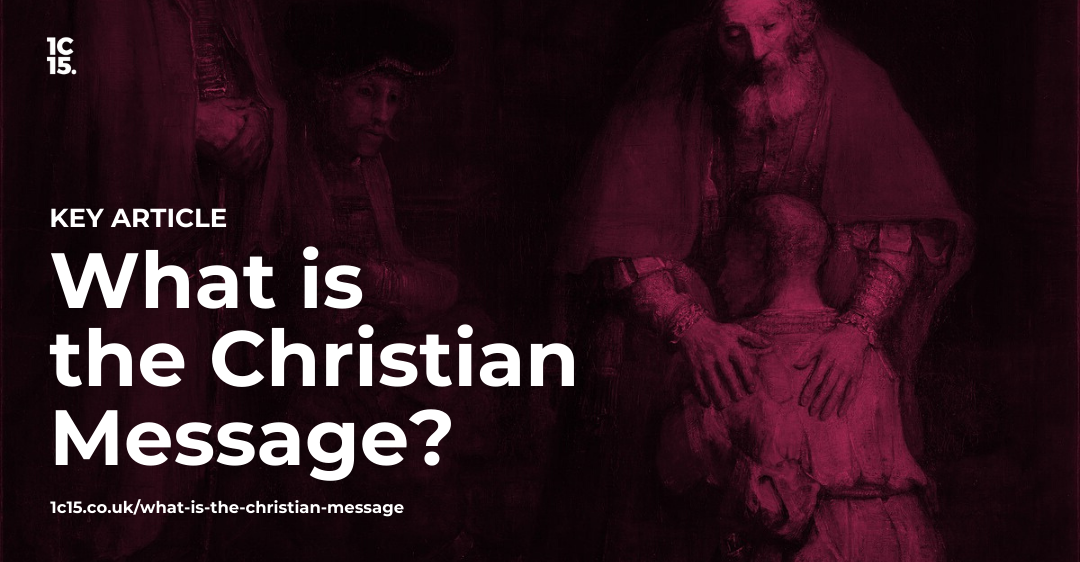 The beginning of the Bible story, or meta-narrative, as recorded in Genesis, lies in God himself and his decision to create a cosmos through the initial bringing forth of the Universe out of nothing, and his eventual creation of humanity, to share the supreme fulfillment of worship, Communion with God, and with one another in him, and to oversee his creation.

Tragically, As the following chapters of Genesis make clear, humanity turned against its Lord and creator, disobeyed His clear command, and experienced it’s supreme Loss –  the disruption of relationship with God. As a result humanity was removed from God’s presence and would know only the world in all it’s coldness. Despite this judgement God desired for a restored Communion with us, and so begins the great story of redemption.

God called Abraham and entered into a covenant (A long-standing promise) with him and his successors, with its accompanying promise of blessing for the whole human family through his later descendants. When, Centuries later, this Chosen family found itself enslaved in Egypt, as recorded in later chapters of Genesis, God sent a deliverer, Moses. He led Israel into liberty, and the book on the Exodus vividly described what happened there. This book also contains a selection of the laws revealed to Moses, complemented in the books: Leviticus, Numbers and Deuteronomy.

After 40 years of wandering in the desert, which tells us the story of God’s constant care of his people in rough times, and a conquest of Canaan, as told in Deuteronomy, Numbers and Joshua, the people found themselves again in the land from which they had departed in the time of Jacob, Abraham’s grandson. Following Joshua’s leadership, it was the Judges that lead in this troubled time. These were people like Gideon, Deborah, Samson, and Samuel. Israel oscillated between seeking and submitting to God, resulting in deliverance from the surrounding enemies, and disobedience which brought judgement in the form of defeat and servitude. These were messy times where we see what happens when the people turn against God and embrace the cultures around them. The story of these years is contained in Judges and the early part of 1 Samuel. In Samuel’s time the people demanded that a king be appointed and so the monarchy was established under its first incumbent, Saul.

One big negative of this is the monarchy could be reliant on Israel’s king over God for Leadership, but it was to provide an important model for the long promised delivery, or Messiah. So the monarchy attained its highest point under David, and then his son Solomon, after which the kingdom divided into two parts, Israel in the North which united ten of the Twelve tribes, and Judah in the south combining Judah and Benjamin. 2 Samuel and the accounts in 1 and 2 kings and 1 and 2 Chronicles cover three and a half centuries of the monarchy, not forgetting the book of Ruth with its endearing story of love and loyalty.

During this period the wisdom writings were composed, as recorded in Proverbs, Job, Ecclesiastes and the Song of Solomon; and worship was renewed and organized, and given profound expression, in the Psalms, many composed by David.

As the centuries passed, both of the confederacies of Israel in the North and Judea in the south proved to be unfaithful to God and his Covenant, turning aside with great regularity to the idolatrous worship of the surrounding Nations, in spite of periodic renewals of leaders such as the prophet Elijah and Elisha, and good Kings like Asa, Jehoshaphat, Uzziah, Hezekiah, and Josiah. Despite the faithful ministry of the great Israelite prophets, men like Hosea, Amos, Isaiah, Jeremiah Ezekiel, Zechariah and Malachi, who’s incomparable and courageous messages resonate still in the books that bear the names, they predicted divine judgement fell on the northern kingdom of Israel in the shape of the Assyrian invasion in 722BC; and Judah, learning no lessons from the northern neighbours’ plight, followed into defeat and Exile at the hands of the Babylonians in 586BC. These disasters are described in 2 kings.

You are not forgotten

But God did not finally abandon his covenant people. The prophets saw and took to new levels of clarity, the promise of God’s special delivery, the Messiah, who would, through incredible suffering, bring God’s salvation not just to Israel, but also to all the nations of the world. These prophets also spoke of a new day of God’s relationship with his people, and a new covenant whereby sin would be forgiven and forgotten, and all his people share a personal knowledge of him. God continued to care for his people, during the time of exile we hear in Daniel’s informative account of God’s dealings with his people so far.

Then a remarkable intervention, God enabled a remnant among the Jews in Babylon to return to Jerusalem in a series of waves, beginning with a decree of King Cyrus of Persia in 539BC, then under Zerubbabel the first exiles laid the foundation of the temple which was finished in 515 BC. Ezra the Scribe lead a further party back in 458AD, as recounted in the books bearing his own name and that of Nehemiah; and under the latter’s leadership the walls of the city were repaired and the people re-establish their identity and renewed their covenant with the God.

God came to dwell amongst us

There followed some centuries of waiting, a midday deepening hope of God’s renewed intervention, until that moment when the time had finally come, God sent his son, born of a woman (Galatians 4:4). And so Jesus was born in Bethlehem; the long promised Redeemer had at last appeared. A human, like us.

God came to rescue us

30 years later Jesus entered upon his Ministry, 3 years’ duration, recorded by the evangelists, Matthew, Mark, Luke and John. Jesus’ ministry reached its destined culmination in his final journey to Jerusalem where he was arrested, tried and crucified with the cooperation of the Roman overlords. A climax is clearly portrayed in the Gospels as, on his part, an act of conscious, loving, self-sacrifice on behalf of all the sinners in the world, and as the fulfillment of God’s eternal purpose of salvation.

God fulfilled his promise to us

On the third day following the crucifixion, Jesus was raised from the dead, and appeared repeatedly over the next 40 days among his disciples and to some who did not previously believe in him. This is recorded in each of the Gospels and also by Luke at the beginning of the Book of Acts.

In the following chapters of Acts, Luke tells the exciting and challenging story in the birth of the church as for its witness to the good news of Salvation through Jesus Christ, first in Jerusalem, Judea and Samaria, and then to the gentile world, concluding appropriately at its centre in Rome.

God rescues the rebels, sceptics and doubters amongst us

Paul, After his dramatic conversion (He killed Christians for a living), Lead the movement into the gentile (non-Jewish) provinces of the empire, and wrote letters of instruction and encouragement to many of his churches, in Rome, Corinth, Ephesus, Philippi, Colosse and Thessalonica, as well as to individuals like Philemon Timothy and Titus. Also through the book of James, Jude and the letter to the Hebrews. The New Testament was compiled by adding last but not least Peters and John’s letters and ending with John’s revelation.

So the scriptures were composed and brought to their final form, the incomparable story of the sovereign, gracious God and his glorious and incomparable salvation, spread across the centuries and millennia, including our own time.

The joy that is to come

So in the infinite faithfulness of God, his promises were kept to the letter. The blessing of Salvation spread Beyond Israel to the whole world, and the new people have emerged across the centuries and finally all around the world. That people is expressed today in the great global family that names the name of Jesus Christ and anticipates the coming day of his reappearing and the Gathering of all the Children of God, from all the ages and Nations, cultures, languages and peoples in The New Jerusalem (new home, not necessarily Jerusalem city), within a new heaven and earth of righteousness. The new order will bring the restoration of the divine communication with God, the Garden of Eden and make the revealed glory of the triune God of creation and Redemption clear.

This great story, the meta-narrative of the Bible, is the implicit context of every verse of scripture. It is accordingly the ultimately defining context for the meaning of every sentence and every word of God’s revealed word.

God. The creator of the universe who created us and all things created us to be with him. (Psalm 100:3)

Our nature, which we inherited from first man (Adam), is made plain and obvious in how we mess up in sick cycles of lying, pride, lust, jealousy, cheating and so on. These actions separate us from God who is good. (Romans 3:23)

Sins. The word we use to describe our messy actions that separate us from God. Doing good doesn’t clear our name. We’re a guilty party, destined to be separated from God. There’s nothing we on our own can do about it. (Isaiah 64:6a)

Paying. Jesus paid the price for our mess, he lived as our example, he put our mess on his shoulders, he took our place, died on our behalf, and rose again as our guarantee (Romans 5:8)

Everyone. All who trust in Jesus alone, is forever forgiven of their mess, are destined for a glorious life with God and reassured of eternal life with him. (John 3:16)

Life. This incredible life with Jesus starts right now and on into eternity (John 10:28)

That is the Good news, the G.O.S.P.E.L. in a nutshell that God asks us to respond to. What do you think? Are you ready to investigate Christianity more seriously? Explore it’s possibility of being true? Maybe it’s inspired you to walk into a church (Or hey, churches do live streams too if you’re not ready for that big step!). I hope and pray that if you’ve committed to reading the articles on God’s existence, the Bible, the resurrection and the problem of suffering and you’re not a christian then I’ve at least given you something to think about. Thank you for your precious time! And enjoy the website! 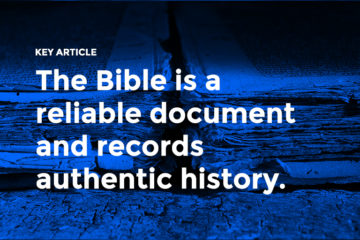 The Bible is reliable

Reading Time: 26 minutes Even before we look at the Bible, we know of a good quantity of records that tell us about the life of Jesus and his followers. External evidences Starting with non-Christian unsympathetic sources that dip Read more…