From Lee Strobel’s “Case For Miracles”

Duane Miller’s used be a preacher at his small church and a passionate singer in worship. It wasn’t just his livelihood to lead a Baptist congregation in Brenham, Texas; it was his passion, his calling, and his source of joy and satisfaction.

One day he got the flu and his throat was described to be like “sandpaper” and his voice would “catch” on words. Each syllable was painful to speak. The flu soon disappeared, but his windpipe remained ablaze and his voice reduced to a raspy whisper. His throat felt constricted, as if someone were choking him.

Miller’s voice was almost gone, he was forced to resign from his pastoral role. He eventually landed a government job researching records—a position he then lost because his inability to speak meant he couldn’t testify in court about his findings. The insurance stop covering and his medical bills skyrocketed.

He says “For the first time in my life, I felt utterly useless. My income, my future, my health, my sense of well-being, all were suddenly beyond my control. It was a terrifying and humbling experience,” he said.

Over three years, he was examined by sixty-three physicians. His case was even scrutinized by a Swiss symposium of the world’s leading throat specialists. The diagnosis: the flu virus destroyed the nerves of his vocal cords, rendering them limp. When Miller asked about his prognosis for recovery, a doctor told him, “Zero.”

Despite Miller’s protests, his former Sunday school class at First Baptist Church of Houston asked him to speak. A special microphone was used to amplify Miller’s soft, hoarse, croaky voice—and the class agreed to endure the grating sound because of their love for him and his teaching.

His text was Psalm 103, where the third verse reads, God “heals all your diseases.” Miller said later, “With my tongue, I was saying, ‘I still believe that God heals,’ but in my heart, I was screaming, ‘But why not me, Lord?’”

He went on to the next verse, which says the Lord “redeems your life from the pit.” He told the class, “I have had and you have had in times past pit experiences.” As soon as he said the word pit, the choking sensation disappeared. “Now, for the first time in three years, I could breathe freely,” he recalled. “I heard a gasp from the crowd, and that’s when I, too, realized my voice had come back. I could hear myself!”

The surprised audience begin to clap, cheer and celebrate. His wife, Joylene, broke down in tears.

Miller, confused by what happened was almost left speechless! See the url below to listen to the live recording (churches often record the church message for their websites, this is not uncommon).

Subsequent doctor examinations showed his throat looks like it never had any problems; in fact, against all odds, even the scar tissue has disappeared. Said one physician, “Even if I could explain how you got your voice back by coincidence—which I can’t—I could never explain what happened to the scar tissue.”

Miller is pastor of Pinnacle Church, serving the Cedar Creek Lake area of Texas. Even more humourlessly, he hosts a daily program on a Dallas radio station— using his voice to tell others about the God who he is convinced still performs miracles. 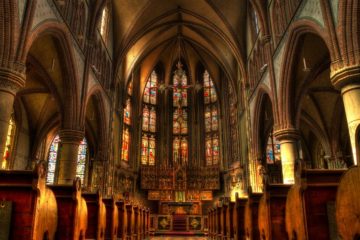